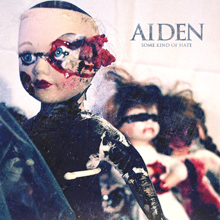 Some Kind Of Hate

This review originally ran in AP 281.

Some Kind Of Hate maintains the anthemic death-pop/metal trajectory Aiden started with their previous release, Disguises. While frontman Wil Francis hasn’t gone public about what the band’s future holds, Hate guarantees that there actually is one. Because the most ironic thing about Francis is that as he’s ratcheted up his contempt for the world, he conveys his distaste against a backdrop that’s downright commercial. Movie directors: Looking for a theme for another remake of Let The Right One In? It’s right there in the opener, “There Will Be Blood.” Hey, Generation Columbine: Need anthemic choruses calling for the death of spirituality? Cue up “Freedom From Religion.” “Grotesque Vanity” is a short rocker top-loaded with rapid-fire beats, guitar noise and female screaming right out of a Hammer horror flick, while their cover of Joy Division’s “Transmission” is ’roided out with arena-rock guitars. With time served in the punk-rock trenches and a fervent cult of fans, Aiden don’t have to answer to anybody. Now then, blood-dipped knives up!