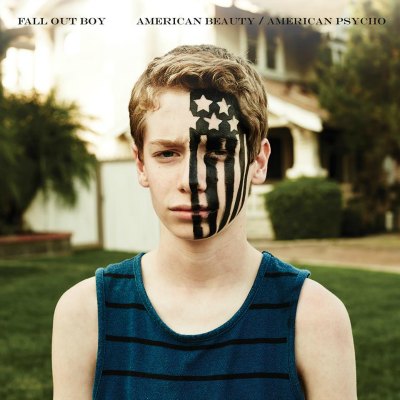 Fall Out Boy have always had a bit of a fearless streak, but it hasn’t necessarily manifested itself on their records. In the old days, the band played each and every live show as if it were their last, thrashing and spinning about the stage, perhaps more concerned with the spectacle than the songs or any war wounds sustained in the chaotic process. As they matured, they began to outgrow the pop-punk playbook, culminating in Folie à Deux, their 2008 pre-hiatus album that was bold, inventive and unlike anything that had come before it. Now, reunited with a solid foundation in place, the band are ready to weird things up a bit again.

It’s a trick that’s rarely been utilized in the band’s past (outside of a song like “Hum Hallelujah”), and a very hip-hop way of constructing songs. But it’s par for the course for the newly reinvented FOB, where we’re to expect the unexpected. And then there’s “Uma Thurman,” an Elton John piano stomp-meets-surf rock number that borrows, of all things, the theme from TV’s The Munsters. There might not be a single rock band alive that would attempt such an audacious move, but that’s what makes Fall Out Boy great: a desire to embrace the ridiculous and somehow miraculously pull it off. (Of course, this ambition can also work against them, as is the case with the title track, an overstuffed mess of synth swells and percussion that’s the weakest cut here.) Still, you get the sense they’re ultimately disinterested in playing by the pop rulebook and are more than bored to death at the increasingly vanilla state of the modern-rock universe.

Of course, it’s a little easier to float between genres when you’ve got a vocalist as versatile as Patrick Stump and a gifted lyricist like Wentz. Their partnership has long been heralded, but the two work perhaps better than ever these days because of their differences. You’d never dream of the normally even-keeled Stump penning lines like “You’ll remember me for centuries,” but on American Beauty/American Psycho, he boldly wears Wentz’s megalomaniacal, grandiose lyrics like a shield. (And let’s be real: There are few lyricists besides Wentz who could name drop Calvin Klein cologne, Rancid, Danzig, Uma Thurman and Judy Jetson on the same album and get away with it.) When the singer angrily barks “I am your worst nightmare” on “Novocaine” or “I could just die laughing on your spiral of shame” on the sinister closer “Twin Skeletons (Hotel In NYC)”, you wonder where this Stump has been for years, a previously unheard fire burning deep in his gut that’s so captivating.

Earlier this month, Fall Out Boy went on record eliminating the possibility of them embarking on the 10-year tour anniversary, a tradition that’s become all the rage recently. Instead they prefer to focus on the here and now. While some From Under The Cork Tree lifers might be disappointed, the fact is that unlike many bands today, Fall Out Boy are currently producing some of the most interesting music of their career. There’s no need to shoot for “Dance, Dance: Part Deux” when a song like “Jet Pack Blues” is infinitely more powerful and interesting. If it’s a retread you want, American Beauty/American Psycho isn’t for you. Because it’s the sound of a band boldly challenging themselves and their fans to let the past be just that, while embracing the weirdness and uncertainty of the new and the next.