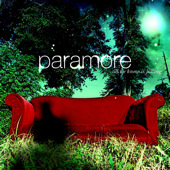 All We Know Is Falling

If you caught Paramore on the Taste Of Chaos tour earlier this year, you probably don't need this review to understand just how much they can stand out from their screaming, male rock peers. The mere sight of the band's 16-year-old female vocalist, Hayley Williams, made this point better than we ever could. On their incredibly polished debut, it's obvious that someone has done Williams wrong (at least as severely as any 16-year-old can be done wrong), but the well-trained boys in her band seem to realize that these vaguely emo, but mostly mall-punk tracks are better off recalling what you might've heard had you just dropped the attitude and accepted the fact that the last Avril Lavigne disc totally ruled.