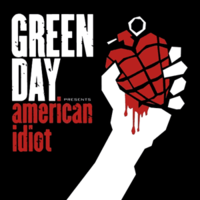 As if Green Day were attempting to wipe their listeners memories of their missteps on 2000’s Warning, American Idiot starts out with the band’s best Undertones-esque punk riffing on a vaguely political song harkening back to their roots in the best way possible. The band then tackle the next three tracks with a vengeance, using three recurring strengths from their back catalog: ’60s pop (“Jesus of Suburbia”), big rock riffs (“Holiday”) and angsty ballads (“Boulevard Of Broken Dreams”). Their songwriting is more careful and complex, recalling the polished stadium rock of Insomniac more than anything, while allowing them to branch out into quasi-concept album territory. Only without that personal element to the songs, it feels harder for the listener to connect to them directly. And when the full-on Broadway chorus of “Homecoming” kicks in and the album pulls a Tommy, it seems a bit out of place. When the album finishes, it’s a bit like a shaky landing on an airplane: you’re glad it’s over, you had a fun trip, but there are parts that worried you a bit.