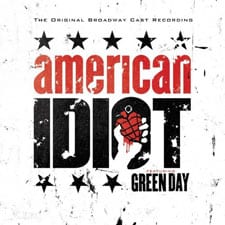 Despite what the haters may say, there's nothing fundamentally wrong with a punk band, especially one as big as Green Day, making a musical. They've got the funds, guts and chops, so more power to them. The only misstep Green Day made with the Original Broadway Cast Recording of American Idiot is this: messing with American Idiot. As advertised, the album features the cast of the just-opened Broadway show singing over Green Day's instrumentals, which in and of itself isn't a disaster; great songs are great songs, and the actors are chirpy and serviceable in a Glee kind of way. But forcing in songs from 21st Century Breakdown just muddies the narrative of the original; more Mamma Mia! than Tommy, the 22-track monster tries to cram too much story into too little space, and the result doesn't do justice to the source material. Onstage it may be a different story, but on disc it's more of a jumbled, if cleanly executed, curiosity. Again, Green Day's ambition should be applauded–but seeing as how they do have all those funds lying around, maybe next time they'll write some fresh material for the stage instead of plundering what they've already done.