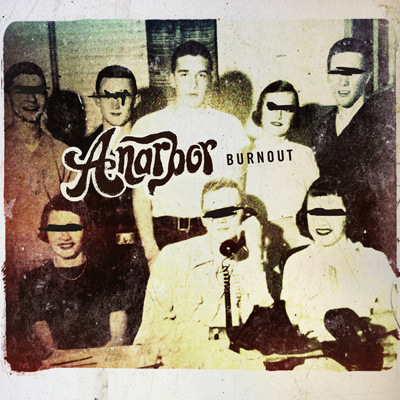 “I know there’s got to be more to life than smoking weed,” sings Anarbor’s Slade Echeverria on the closing track of his band’s second album, but you wouldn’t know it after listening to Burnout. Indeed, it seems Anarbor have received quite the reputation as Hopeless Records’ bad boys, and Burnout does little to sidestep that notion, with nearly every track boasting a reference to drugs or booze (sometimes both). In this way, Anarbor have become one of Hopeless’ more curious acts: One listen to tracks like “18,” complete with a breezy guitar riff and pitter-patter drum machine, and the sparkling ballad “Take My Pain Away” shows Echeverria definitely has the hooks to hang with his pop-oriented labelmates like All Time Low and We Are The In Crowd; but the band have the habit of turning that pop mentality on its head, coupling a catchy chorus with a lyric that’s a little more brash (and chemically influenced). Call it self-sabotage or a wink-and-nod reference to disrupting the natural construction of pop songs, but it’s a wrinkle that makes the group appealing in a sea of brass ring-chasing peers. The issue with Burnout is these moments happen less frequently than they should. Sure, “Whiskey In Hell” stands as one of the band’s best tracks and “The Damage I’ve Done” is a poignant slab of remorse a lá Unwritten Law’s “Save Me” but track after track of slinky guitar riffs and pounding drums (especially in the album’s less-than-memorable middle section) gets repetitive, resulting in a bit of a hangover by Burnout’s end—or at least a harsh contact high.