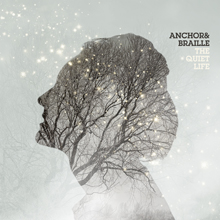 When Anchor & Braille—Anberlin frontman Stephen Christian’s side project—released their debut album, Felt, in 2009, those expecting a one-man version of Anberlin were disappointed. The album paired Christian’s subdued vocals with haunting lyrics and distinct instrumentation. The album was light years away from Anberlin’s guitar-driven rock, but it was a risk that paid off, proving Christian isn’t afraid to step outside his musical comfort zone. With The Quiet Life, Anchor & Braille’s sophomore effort, the band keep many things the same, but manage to fit in some new tricks that propel the album forward.

The Quiet Life showcases a myriad of musical influences without straying far from its bread and butter: minimal lyrics and lush musical tones. Opener “Goes Without Saying” starts with a dancefloor beat then swiftly moves into Owl City territory with its airy vocals and twinkly music. The piano ballad “Hymn For Her” is reminiscent of Coldplay, while the heavier-handed “In With The New” would fit perfectly on Muse’s Black Holes & Revelations.

Often, Anchor & Braille’s musical ideas work well. Other times, the band fall short. Christian’s voice sounds distorted and out of place on the eerie “Kodachrome.” On “Everybody Here Wants You,” Christian aims for sexy slow jam, but the song sounds awkward coming from this eternal nice guy.

The Quiet Life is an unassuming album that doesn’t stray far from the formula introduced on Felt. Fortunately for Anchor & Braille, it’s a formula that continues to work.