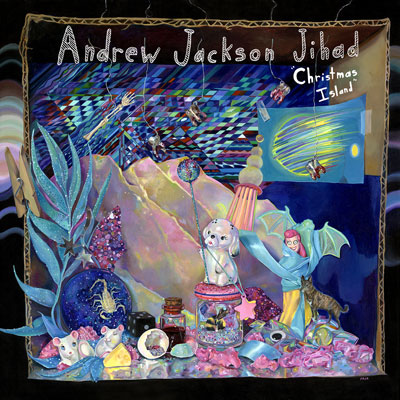 Andrew Jackson Jihad haven’t changed much since their 2004 formation. Five records later, their formula of humorous anecdotes plus serious revelations—all laid over a distorted, acoustic anti-folk-punk background—remain, but frontman Sean Bonnette has new problems to deal with. He sounds downright frantic on “Children Of God” as he proclaims, “Everybody dies alone,” while the rest of the band clunk and plod away, keeping pace with the song’s frenzied tone. Things calm down a bit on “Linda Ronstadt” as Bonnette matter-of-factly recounts “losing his shit in a museum” while an acoustic guitar and piano leisurely move the whole thing along. Everyday issues like self-doubt (“I Wanna Rock Out In My Dreams”) and frustration (“Kokopelli Face Tattoo”) weave their way through Christmas Island, but the album’s prominent theme is also its darkest: the death of Bonnette’s grandfather, addressed on “Angel Of Death” and “Deathlessness.” The latter verges into alt-country territory then fades out; all that’s left is Bonnette plaintively singing, “How can I live without ever knowing the beauty of forgiveness?”