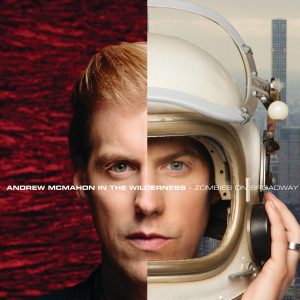 Andrew McMahon's music has always had strong ties to California, in the form of vibrant characters (the pot-selling lesbians in Jack's Mannequin's “Holiday From Real”) or locales (the alluring-but-disorienting Topanga Canyon depicted in “Canyon Moon”). That hasn’t changed on Zombies On Broadway, the pianist's second album as Andrew McMahon In The Wilderness. “Come home to California,” he croons on “Walking In My Sleep,” a song about trying to reconcile the distance between where someone is and where they want to be.

Yet he comes by that yearning honestly. For Zombies On Broadway, McMahon switched coasts and recorded the bulk of the record in New York City. That new scenery no doubt explains why the record's overarching themes—the challenge of juggling work and real life, navigating the anxiety and optimism involved with chasing ambitious dreams—feel so urgent. But NYC's relentless forward progress also informs Zombies On Broadway’s sonic approach: Not only does the album overflow with stick-in-your-head hooks, but it also boasts contemporary production, from sleek digital programming to airy synthesizers, to go along with more traditional band-based instrumentation.

Thankfully, as the Wilderness' self-titled 2014 release proved, McMahon is at ease exploring this kind of modern production. The highlight “So Close” is an energetic '80s electro-rock jam, “Shot Out Of A Cannon” resembles Coldplay's Technicolor Top 40 and “Love And Great Buildings” is earnest, percolating synthpop.

Fittingly, McMahon finished Zombies in California. These sessions produced another standout, “Brooklyn, You're Killing Me,” a song whose piano, percussion and spoken-word delivery has an Everything In Transit vibe. In other words, no matter where McMahon's travels take him—and his music—California is never far away, both in his head and heart.

Our Pick: “So Close”