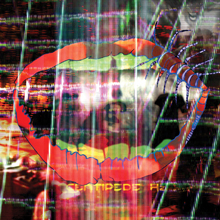 A listener can drop in at almost any point in Animal Collective’s decade-plus career and find a likeable piece of music with which to connect. 2007’s Strawberry Jam was most accessible through the primal screams of “Fireworks”; 2009’s Merriweather Post Pavilion had the thumping “My Girls.” But on the band’s ninth full-length, Centipede Hz, the four-piece don’t make that entry point quite as clear—which gives the listener all the more reason to listen. “Wide Eyed” and opener “Moonjock” are sparkly radio transmissions that sound as if Animal Collective have finally left Earth and colonized a new tropical planet (“Father Time” fits in here, too), while somehow staying grounded and more traditionally garage rock in style than previous albums. Tribal beats (“Pulleys”) will always be the band’s mainstay, but Centipede Hz stretches them out of their traditional organic structures and into a slightly unknown world. The more time passes for Animal Collective, the more time the group have to keep making the same record over and over again—but a better version, each layered with teenage scream-outs, watery, synthesized sounds and a generally comforting atmosphere of dance beats and simple, easy-to-memorize lyrics.