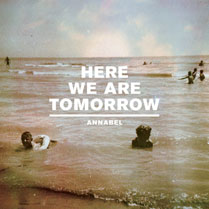 Here We Are Tomorrow EP

It feels funny calling a band so indebted to ’90s emo tenderness “confident,” but that's precisely a blessed trait that Annabel take on for their newest EP, Here We Are Tomorrow. Their Tiny Engines debut leaves behind the frailer, vaguely lilting tilt of their prior full-length, 2009's Each And Everyone, in favor of a fussy sounding, lo-fi swagger a la American Football with early Death Cab For Cutie's breathy restraint. Either way, trying to relegate the band to mere '90s emo revival admittedly ignores the confluence of other aspects at play here: indie-pop/rock melodies (“The Forgetting Of Names And Faces”); post-rock tones and crescendos (“The Secrets Of Learning”); and a looser playfulness (“We Came As Today”). It helps the band establish a curiously unique identity in the process, and that helps result in their strongest release to date.

“We Came As Today”