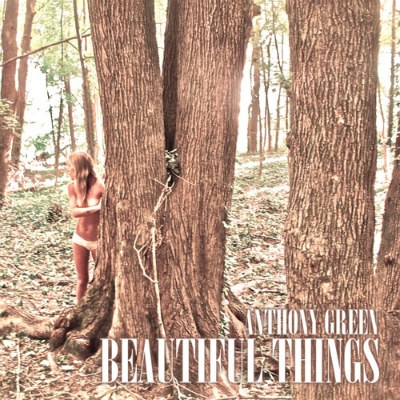 For whatever reason, honesty is surprisingly difficult to come by in modern music. Songwriters agonize over their lyrics, either trying to cloud them with difficult metaphors to hide their personal relevance or dumbing their emotions down to try and appeal to the broadest possible audience. Anthony Green is no stranger to the former; the first two Circa Survive albums are loaded with his esoteric musings. But a series of life events–his marriage, his first child, his newfound independence from mental-health medication–have altered his songwriting style for the better (and hopefully permanently). Beautiful Things, his second solo album, is a perfect representation of who Green is as a person now, and it pulls no punches as he wrestles with the joy, pain and struggle of growing up without necessarily growing old.

Recorded with Green's longtime friends and backing band Good Old War, Beautiful Things doesn't veer too far stylistically from 2008's Avalon. Tracks run from folksy and fragile (“Do It Right,” “Lullaby”) to angular and aggressive (“If I Don't Sing,” “Can't Have It All At Once”). Green recruits some friends to add their talents to the proceedings, too: Circa bandmate Colin Frangicetto sings along with Green on “How It Goes;” Canadian electro-popper LIGHTS shows up on “Just To Feel Alive”; Maps And Atlases' guitar virtuoso Dave Davison adds some extra licks to first single “Get Yours While You Can”; and Ida Maria duets with Green on the fiesty rock 'n' roll number “Can't Be Satisfied,” available as a bonus track. But Green and Good Old War don't really need the help; they're adept at everything from improvised a cappella numbers (“Do It Right”) to electro-dub (“When I'm On Pills”). Frankly, one of Beautiful Things' few faults is the lack of more Good Old War; their impeccable vocal harmonies only creep up on a few tracks.

Really, though, the music is just a backdrop for Green to share his innermost thoughts, from his realization that “I'll always be unhappy if I don't sing” (“If I Don't Sing”) to the self-reminder to “get your life together” (“Do It Right”) to the numerous tracks written for and dedicated to his one-year-old son, James (“Love You No Matter What,” “Lullaby” and the most poignant, “James' Song, which finds Green singing, “He laughs at everything/Unknowing the joy that he brings/There is this light in his eyes/So bright no one can deny.”) It's inspiring to see someone who has publicly struggled with so much throughout the past decade finally get to the point where he finds his true meaning and fearlessly explores it, no matter who may be listening. Green finds time to deviate from this opening of his diary with “Blood Song.” Inspired by the 2007 film There Will Be Blood, the track tells the story of the wife of an oil rigger who dies in an onsite explosion (seen in the movie). It's an odd place from which to draw inspiration, but it works surprisingly well lyrically. Unfortunately, the song suffers from a bouncy, faux-country arrangement that comes across as hokey instead of sincere.

Still, the amount of truly magical moments on Beautiful Things significantly outweigh any missteps along the way, making this an incredibly strong entry in Anthony Green's catalog–and one of the most honest albums we've heard in quite some time.

“Get Yours While You Can”