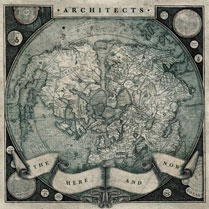 The Here And Now

Genre detractors have prophesized the downfall of melodic hardcore—aka metalcore—for years. Strange then, that at what should be its lowest point, an act such as Brighton, U.K.’s Architects issue their strongest work to date. Brimming with fiery intensity and tempered by melodic infusions, their fourth full-length, The Here And Now, boasts barbaric half-time rhythms reminiscent of New York hardcore's formative years that collide against ravenous explosions of scorching vocals and drums so relentless, even Converge would take notice. Still, these beastly, extreme aspects are countered by sublime moments, resulting in an onslaught of sinewy orchestration and a union of disparate aspects through hyperactive, distorted instruments and embittered passion. While the band could still rely a touch more on frontman Sam Carter's raging bellow over lilting harmonies and eliminate some of the invasive peripheral electronics (digital beats, keyboard sizzles and other embellishments), Architects have never been as refined or grandiose. Familiar without seeming like retread and progressive but far from alienating, The Here And Now is concrete proof that there's still some life left in emotionally charged melodic hardcore.