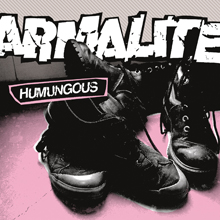 It's been five years since the first and only release from this Fest-ready supergroup, the self-titled and unstoppably great Armalite. Since then, the members of Armalite have remained pretty busy, so the radio silence is excusable, if disappointing; bassist Dan Yemin has his real life as a child psychologist to attend to when not playing in Paint It Black, Kid Dynamite or Lifetime, while vocalist/guitarist Adam Goren, the former braintrust behind Atom And His Package, spends his days as a prep school physics and chemistry teacher. Oh, and drummer Jeff Ziga plays in Affirmative Action Jackson, while Mike McKee, the band's other vocalist/guitarist, does double duty in Amateur Party and Kill The Man Who Questions.

With the band's brian-boggling pedigree out of the way, all that's left is the tunes, which pick up right where Armalite left off lo these many years ago. While the three-song Humungous EP is sonically rougher around the edges, the songs are every bit as creative as those that came before them, melding a throwback-punk vibe with each member's natural inclination to color outside of the genre's lines. The sound is recognizable to any fan of the poppier end of the No Idea Records roster, but the unique structure and phrasing speaks to the cumulative experience of Armalite's members. The best song is the Goren-led “Double Negativity-ing,” which packs all the hooks and left-turns of a classic Atom And His Package song, melded with the speed, volume and intensity of a big, proper punk band. Write more songs, guys. And try to do it in less than half a decade, if possible.