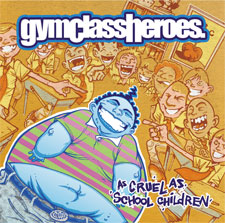 As Cruel As Schoolchildren

It may seem odd to say that one of the best hip-hop records this year comes from a band discovered by Fall Out Boy’s Pete Wentz, but it’s the truth. As Cruel As Schoolchildren is nothing short of classic. Gym Class Heroes’ organic live instrumentation has come along way since their last release, 2005’s The Papercut Chronicles; sometimes the playing is so good, you’d think they were using samples. Some skeptics might dismiss them as a novelty, but frontman Travis McCoy ain’t having it: He takes turns snapping back at ill-minded critics on tracks like “Biters Block” (“This is nothing fraudulent”) and “Shoot Down The Stars” (“When you dis it’s just food for the flowers to grow”). And if you thought you weren’t the type to get down and shake your ass, “Clothes Off!” is a delightful Prince-sounding funk-fest that will be lurking in your head for weeks. Lyrically, the album is mostly lighthearted, save for a brush with alcoholism on “The Queen And I,” which pushes the envelope past the party vibe. So while you’re a little confused about the concept of a hip-hop/emo axis, well, that’s the point. Music is music, regardless of the genre. This album is proof.