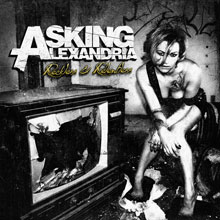 Reckless & Relentless, the second full-length from U.K. electro-metalcore outfit Asking Alexandria, still features heavy doses of synth on a few tracks, but overall it’s much less rave-driven than their debut, 2009’s Stand Up And Scream. They’re indulging their inner rock ’n’ rollers more this time around; “Closure” may kick off with distorted beats, and a few digital stutters pop up here and there, but the main guitar riff sounds more like Avenged Sevenfold than anything else on Sumerian Records. “The Match” is similarly swaggering, until it becomes almost gabber techno in its final minute. “Someone, Somewhere” is the album’s biggest surprise—a damn catchy song with absolutely no screaming, it could easily find its way onto hard rock radio.

The band haven’t abandoned the downtuned, chugging breakdowns that were so key to their sound, of course; most of Reckless rumbles like a bulldozer in low gear trying to drive up a concrete staircase—when they’re not slowing down for the heartfelt sung parts. The final track, “Morte Et Dabo,” ends with an almost symphonic coda, like they’re auditioning to soundtrack the upcoming Conan movie. Asking Alexandria haven’t radically changed their sound, but there’s enough evolution on Reckless & Relentless to convince any listener that they’re more than metalcore also-rans or one-trick ponies.