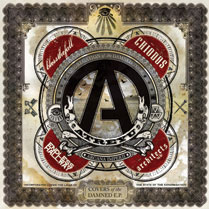 Covers Of The Damned EP

If we told you Atreyu were covering Aerosmith, that wouldn’t seem that jacked up, right? A lot of contemporary bands owe a debt of influence to the hobbling grandfathers of hard rock. But what about if we said it was a mid-period, MTV-era, shitty Aerosmith song like â€œLivin’ On The Edgeâ€? No, still not surprisingâ€”especially when you consider that this is a band who have regularly covered Bon Jovi’s â€œYou Give Love A Bad Nameâ€ over the years. With their polished, soaring pop choruses and flirting-at-the-mall-food-court-friendly metal, the Orange County, California, heavy-hitters know what side of the metal/pop divide their bread is buttered on.

That song is just one part of the mix on this quickie EP commemorating their upcoming Congregation Of The Damned Tour. For help they’ve enlisted members of tourmates Chiodos, Blessthefall, Endless Hallway and Architects (UK). Sounds like a dream come true for metal(core)headsâ€”in theory. â€œEdgeâ€ is a mostly faithful cover, with Atreyu excelling with the multi-tracked studio-sheen vocals that they do so well. The guttural screaming break in the middle of the song is a bit jarring, and doesn’t exactly fit the song, but anything’s better than Steven Tyler’s dreadful blues scattingâ€”although Alex Varkatzas does manage to work some of that in at the song’s conclusion. (Thanks for that.)

Being too precious about covers of beloved bands is basically the type of phony bitching that the internet was designed for, so expect a bunch of self-serious punks to get a little salty about the next track, â€œHoliday In Cambodiaâ€ by Dead Kennedys. At the risk of being sacrilegious, the improved production of this mostly dead-on update suits the song well. Don’t like it? Too bad. The original still exists, so go tell someone who cares. Likewise, the cover of Deftones’ â€œMy Own Summer (Shove It)â€ should inspire beef from overprotective fans. Aside from missing the unmistakable menace of Chino Moreno’s voice, it’s a note-for-note replica. Chiodos’ Brandon Bolmer avails himself admirably on the huge, screaming notes all the same. Thin Lizzy’s â€œThe Boys Are Back In Townâ€ doesn’t fair quite as well, the screamo background vocals here seem almost a parody of the genre on the breezy glam classic. It’s still fun to hear what this collection of bands do with it, which is the point of the whole EP. It’s not meant to hold up to critical scrutiny. Novelty and fun are good enough reasons to record a songâ€”and to listen to them, too.