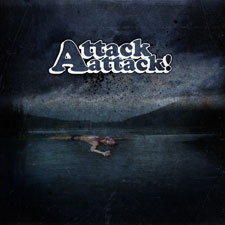 Yes, Attack Attack! are “that crabcore band” who made one of the most ridiculous music videos ever for their song “Stick Stickly.” Yes, they've cycled through two previous vocalists (all in the span of one album) and a mountain of shit talk. And yes, their song titles are positively absurd, annoying inside jokes that undercut any level of talent the band may have. But here's the thing: Attack Attack!, for all their faults, actually are skilled at the whole metalcore thing.

“Sexual Man Chocolate” is propelled with a haunting piano line and is reminiscent of Chiodos' heavier moments off Bone Palace Ballet. It's followed by “Renob, Nevada,” a positively bone-crunching number led by keyboardist Caleb Shomo (making his gutteral-vocal debut on this record) that is sure to stir the pit. Hell, “AC-130” is essentially one long breakdown–it's not exactly the kind of thought-provoking modern metalcore someone like Norma Jean or Underoath peddle in, but it gets the point across: Attack Attack! can play.

Where the band's self-titled sophomore album fails, though, is at the unbelievably terrible attempts to incorporate electro-pop (“Shut Your Mouth,” which at points sounds like, no shit, Sisqo's “The Thong Song”), Auto Tuned crunk (“Fumbles O'Brian,” which shares an identical keyboard-theatrics pre-set with the opening of “Turbo Swag,” among other tracks) and smoove R&B (“Lonely”). It's entirely possible that Attack Attack! recorded these songs in all seriousness, but it's more than likely at least one of these guys had a shit-eating grin on their face while in the soundbooth.

So that leaves us with a 10-song album, the majority of which is surprisingly heavy, in-your-face (if not exactly original) metalcore. Attack Attack! are quickly becoming a better band than their detractors might think; hopefully, they can shake off their sillier influences next time around.