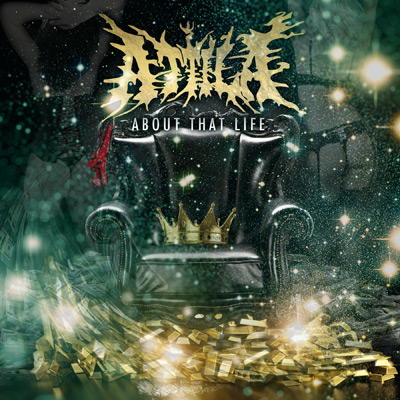 Some bands are so breathtakingly stupid they tumble forward into a kind of genius. On their fifth album, Atlanta deathcore knuckle-walkers Attila have at last reached the lofty realm populated by Limp Bizkit, Emmure, Brokencyde and Hollywood Undead. Their blend of savage, downtuned riffing, concussive drumming and nihilistic party-till-someone-gets-hurt lyrics (alternately roared in guttural death metal style, and sneer-screamed in a manner that recalls flyover-country rebel kings from Guns N’ Roses and Junkyard to Hellyeah) is bolstered by their willingness to hurl breakdown after breakdown, punctuated by the occasional squiggly guitar solo, at their sun-poisoned, drunk-high-and-horny audience, ultimately yielding one of 2013’s most potent party albums. With track titles like “Middle Fingers Up,” “Thug Life,” “Break Shit,” “Shots For The Boys” and “Party With The Devil,” you can’t possibly blame anyone but yourself if you don’t know what you’re getting into before you press Play on this slab. Within half a song, you’ll be laughing, headbanging and quite possibly barking along. That said, there’s an undercurrent of misogyny that pops up from time to time and threatens to spoil the fun. But if/once you get past lines like “punch that bitch,” you’ll be hoisting beers and throwing fists in the air in no time.