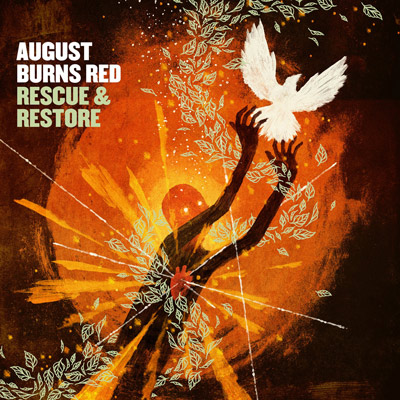 Now a decade into their career, Lancaster, Pennsylvania, quintet August Burns Red have stated they are on a mission to revive metalcore from its self-induced coma of conformity, and their latest, Rescue & Restore (the title being a nod to said crusade), puts the band’s music where their collective mouth is. An immediately impressive work of skill and creativity well-removed from the rehashed riffs and tired scream-sing antics that plague the genre, Rescue is a bold step forward for both the band and anyone attempting to follow it.

As much as Rescue has all the hallmarks of a modern metalcore album, tipping its hat to essential contemporaries like As I Lay Dying and Darkest Hour, this is the work of a mature, experienced outfit with a vision all their own. As a listener it’s a thrill to experience the album’s myriad twists and turns. Although it’s almost ominously dense in terms of the sheer amount of notes played, Rescue & Restore’s 11 tracks still seem to blaze by without becoming repetitive, with a flurry of legato guitar lines and blastbeats that flow linearly from one idea to the next. Traditional song structure in the verse-chorus sense is completely thrown out the window, and this case, it works to perfection, allowing the mind to focus on each musical or lyrical idea, rather than the underlying pattern.

Vocally, the band present their well-established Christian foundations in a way that resonates on a very human level, without preaching. Indeed, Rescue & Restore struggles with the very essence of the human condition—namely why we’re here, and where we’re headed (e.g. “Beauty In Tragedy”)—transforming man’s eternal existential dilemma into a darkly melodic metal concerto. Although Rescue & Restore may not ultimately provide those elusive answers, albums like this one provide us with fuel for the search.