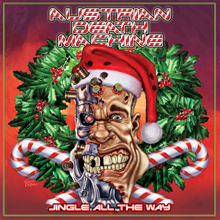 Jingle All The Way EP

The problem with comedy bands is that the joke is always going to wear thin sooner or later. Having released two albums (the second a double album) and now their second Christmas-themed EP, it’s fair to say Austrian Death Machine have more than outstayed their welcome. The brainchild of As I Lay Dying vocalist Tim Lambesis, the band’s output is comprised of an onslaught of cast-off metal riffs over which he screams vocals premised on the life and works of Arnold Schwarzenegger. Garnishing this, Lambesis calls upon a stable of shredders to provide over-the-top guitar solos, and either impressionist Josh Robert Thompson or Count Your Curses vocalist Chad Ackerman to add commentary and pained grunts in the voice of the Governator himself. Rocket science it ain’t.

Jingle All The Way brings together three songs based upon the 1996 Schwarzenegger flick of the same name, and it sticks to the template without much in the way of deviation. With thrash (“I’m Not A Pervert”), hardcore (“It’s Turbo Time”) and chugging deathcore (“Who Told You You Could Eat My Cookies?”) there is at least a little in the way of variation, and in terms of production and performance it’s all solid, armor-plated sounding stuff. In fact, “I’m Not A Pervert” is all the more frustrating in that musically speaking it’s pretty bracing, and the solos on each of the tracks are all far too good to be wasted on such throwaway material. But otherwise, everything is workmanlike stuff, and no amount of screwing around or funny voices is going to elevate it above this.

If you are new to Austrian Death Machine, you may well be amused by the excess and sheer silliness of it, particularly if you’re a diehard aficionado of bombastic ’80s and ’90s action films. But this doesn’t change the fact that this collection is just about as superfluous as it gets.