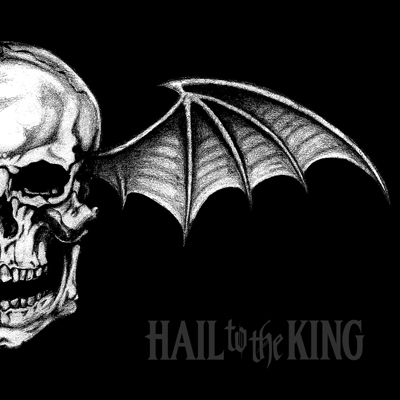 Hail To The King

Throughout the course of Avenged Sevenfold’s last few albums, they have evolved into a more hard-rock-oriented wrecking crew while still retaining a strong tie to their metallic roots. With an evident desire to write the biggest music imaginable, they have upped the game with every release, and Hail To The King is an epic album indeed—and possibly their best to date. Yes, at times it sounds like a virtual rewrite of Metallica’s Black Album, at others Use Your Illusion-era Guns N’ Roses, but this just channels into it being a great soundtrack for whipping arena audiences into a frenzy.

The Metallica influence is evident from the off, “Shepherd Of Fire” coming in with a dirty riff over a stomping beat, and if James Hetfield’s vocals let rip rather than M. Shadows’, it would not be a surprise. Still, it has the A7X stamp on it, and this is just as prevalent on the titanic “This Means War” and the mean grooves of “Heretic.” Likewise, the energetic romps “Doing Time” and “Coming Home” crackle with swaggering cool, while A7X launch into full-blown power-ballad territory with “Crimson Day,” which just barely stays on the right side of cheesy. Enlivening every track are the lithe leads and solos of Synsyter Gates. Adding texture and dynamism in a manner that breathes extra life into them, the guitarist really is the heart of the band, and air guitar fanatics are in danger of developing RSI in trying to keep up with him.

Of course, it would not be an Avenged Sevenfold record without a whole lot of melodrama, and they haven’t skimped. Backing up their chunky riffs on the aforementioned “Shepherd Of Fire” and “Planets” with what sounds like Satan’s own horn section does not make for a subtle effect; neither does Shadows’ demonic cackle kicking off “Doing Time.” However, they reserve the lion’s share for the frankly berserk “Requiem,” which features a rather agitated sounding choir, massive orchestral arrangements and a spoken word section, and somehow they bring all this together in a winning fashion. Compared to this, the tragedy-tinged closing waltz of “Acid Rain” falls a little flat, Shadows’ voice at the forefront as the orchestra and guitars swirl around behind him, ending the record on a reflective but somewhat unexciting note.

That this is by far the band’s most commercial outing will send purists running for the hills, but then most of them may well have jumped ship a while ago. However, those who fell in love with 2007’s self-titled release or 2010’s Nightmare will find plenty to fall for here, too. It’s a big, shiny, shamelessly indulgent affair played by talented musicians, and when it comes down to it, it’s just a lot of fun. Switching your brain off before approaching is optional, but it can’t hurt.