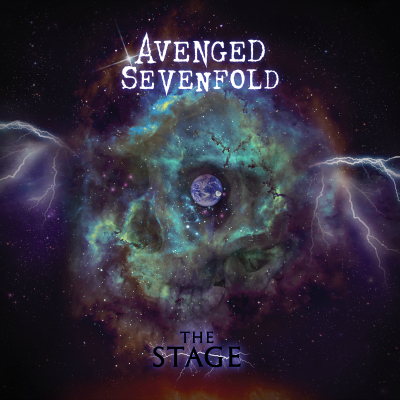 Straight up? Avenged Sevenfold’s new album is compelling because the SoCal quintet unashamedly continue to embrace their larger-than-life arena-rock ambitions, while genuflecting at the altars of the gods of hard rock and metal before them—on their own terms. While many bands that came up through “the scene” are now willing to cozy up to radio programmers to play shows where the stage backdrops have more corporate logos than an Indy 500 racecar, The Stage finds A7X looking back and forward to seal their destiny. With a science-fiction undercurrent underpinning the 11 tracks, song lengths that hearken back to old-school Metallica (ca. …And Justice For All) and all kinds of sonic sorcery (dystopian dialogue, horn sections, tasteful electronics, choirs, codas of acoustic guitars and keyboards, you name it), The Stage makes things really interesting for the band, their fans and long-in-the-tooth metal fans who may have dismissed A7X for some hackneyed reason or another.

Frontman M. Shadows has carved out his own vocal personality somewhere between the rarified altitude of legend-era Geoff Tate and James Hetfield’s populist growl. On “Sunny Disposition,” he comes off like a chrome-plated desperado (“We’ve been through hell/Sewn up our eyes/Found fuel in meds”) going from shots-and-smokes gruffness to a hard staccato most rappers would kill for. The twin-guitar team of Synyster Gates and Zacky Vengeance maintain their roles as bona fide guitar heroes, bringing both the shred (“Fermi Paradox”) and the finesse (the acoustic coda at the end of the near-nine-minute title track) in equal parts. New drummer Brooks Wackerman brings back all the technicality and fire that was missing rhythmically on Hail To The King. His phrasing on the amazing “Creating God” is the perfect launchpad for Shadows, Gates, Vengeance and bassist Johnny Christ to power through. Ditto on “Simulation,” where the drummer navigates the proceedings deftly from tribal rolls to forceful hitting worthy of a hedge-fund manager’s face. You may have heard Wackerman in Bad Religion; you haven’t heard him like this.

A7X are stridently confident in who they are as songwriters and musicians, otherwise they wouldn’t have dared to attempt their most ambitious gesture yet: The near-16-minute closing track “Exist” is a prog-shred opus, starting as a massive fretboard workout before downshifting into a lush, warm atmosphere (ca. late-era Pink Floyd), before the whole enterprise downshifts into a reflective meditation on the state of the world, only to be accelerated once again with the guitarists, Wackerman and guest keyboardist Jason Freese offering a majestic, celebratory workout while acclaimed astrophysicist Neil deGrasse Tyson offers philosophical insight to the plight of mankind and the universe as we (don’t) know it.

More so than any of their previous releases, The Stage finds A7X evolving at a rate that is natural and organic. They didn’t call in EDM producers to provide awkward rinse-and-drop dynamics, superstar MC’s to spitball lyrics or make any leftfield turns into unnecessary genres. What they did do was stick to their guns. And as the old guard of arena-filling hard rockers begin to diminish (physically, artistically), it’s good to know there’s someone dedicated to keeping the bar high.