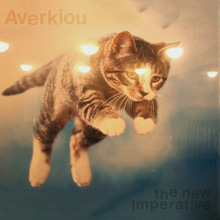 The scene down in the swamps of Gainesville, Florida, is far more diverse than meets the eye. For every band riding Hot Water Music’s coattails in hopes of parlaying that into a deal with Paper + Plastick or an appearance at the Fest, there’s seemingly another doing the exact opposite of that. Enter Averkiou, a four-piece who have been active for half a decade without any signs of embracing their inner Chuck Ragan. Their latest EP, The New Imperative, is another solid (albeit brief) collection of hazy, mid-tempo rock that’s simultaneously captivating and lulling. The band create a nice dynamic of distant, sleepy vocals and buzzsaw guitars awash in reverb on “Fuzzy Photograph,” which admittedly could be a descriptor for much of the band’s work. (If it ain’t broke, don’t fix it, right?) “Go Matsumoto!” is just a bit more jangly than its predecessor, and both it and “Present Tense” inject a healthy dose of “oohs” into the mix for an added layer of unexpected indie-pop influence from a band who have quietly become one of the most interesting in their scene.