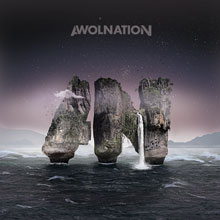 There has been some talk on the internet that Aaron Bruno, aka AWOLNATION, could be this generation’s Trent Reznor. And while those are high accolades for any Pro Tools-proficient artist to be living up to, Bruno definitely has the smarmy pomp down on his debut album, Megalithic Symphony. Often he even has the skills to back it up, like on “Soul Wars,” which could have easily been a Nine Inch Nails or Ministry single during the heyday of ’90s industrial alternative rock. Bruno comfortably treads many different styles of alt-rock, delving into the ultra-safe arena rock of later U2 (“People”) and even going as far as emulating the feel-good gloss of (gag) James Blunt (“Jump On My Shoulders”), with a few screams thrown in to remind listeners this isn’t meant for 40-year-old yoga enthusiasts.

If the goal is to conquer the world with cleverly disguised mainstream rock, then Bruno might have success on his hands. But nothing on Megalithic Symphony is dangerous or challenging or original. It’s all a rehash of whatever second-tier alt-rock this guy was listening to in his formative years. (Garbage? Filter? Maybe even Marilyn Manson?) Now, channel that through a “how-to-get-the-most-plays-on-Myspace” sequencer. Meanwhile, countless bands who originate and innovate continue to hammer away on their instruments in obscurity. So, what else is new, right?