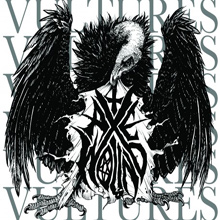 Born of a desire to do something a little different to his day job, Bullet For My Valentine frontman Matt Tuck enlisted Pitchshifter drummer Jason Bowld with the purpose of churning out some chunky, straight-ahead metal—and AxeWound came to be. Roping in Liam Cormier of Cancer Bats on vocals, the result pretty much embodies the initial goal: 10 tracks of thrashing, angry music designed to cause neck spasms in all who encounter it. While not a million miles away from BFMV’s sound, the most obvious other sonic comparisons lie with early Soulfly (minus the tribal elements), and perhaps Prove You Wrong or Cleansing-era Prong, Cormier’s ferocious bark adding extra bite.

Those who live and die for music played at a breakneck pace and stained with bile will find plenty to enjoy. Bowld’s busy drumming adds an air of franticness to many of their faster moments, including “Victim Of The System” and “Blood Money And Lies” (the chorus of which has a strong Vision Of Disorder vibe), allowing the band to stand toe-to-toe with the waves of modern thrash bands vying for attention at present. When they slow things down (a little), the focus is on crushing grooves. “Post Apocalyptic Party” and the anthemic “Cold” are definite standouts, while “Destroy” delivers a fist in the air and one in the face. The only real divergence comes with the gothic drama of “Collide,” which is prefaced with mournful piano before unleashing its juddering chugging and the most dramatic chorus on display, and it sits well alongside the meat and potatoes comprising the majority of the record.

The biggest hindrance obstructing falling in love with Vultures is that good as it is, much of it is still far too familiar to be taken on its own merits. There’s not a song here that fails to bring to mind the work of another, better band. Also, while Tuck keeps his vocal contributions to a minimum when they do arise they often seem intrusive, detracting from the ferocity Cormier provides. That said, it is still a fun record that boasts a few minor gems and that may well endure, and should they take the album on the road moshers will love them for it.