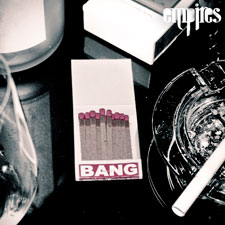 Chicago quintet Empires explained the series of singles that now comprise this EP as choosing quality over quantity. They almost inexplicably chose not to saddle these five songs with a half-dozen filler tracks and label it an album, as just about any other hungry young band might've. Of course, Empires are smarter than that, and guitarist Tom Conrad's already tasted success as a member of the Academy Is… during their Almost Here album cycle. They've set about doing this right. It's a sentiment reinforced by these sterling alt-pop tracks boasting delicious symmetry of texture and tension. Though at heart a polished melodic-rock act poised for broad appeal, there's a touch of bristle in their swelling and crashing guitars. Informed by the sweeping anthemic post-punk shimmer of acts such as British Sea Power and Keane, they're nonetheless much less romantic and melancholy-inclined, pursuing a more propulsive course.

Nowhere is this more apparent than on the showstopping title track, which distinguishes itself with its energy and allure. Clocking at three-and-a-half minutes, it leaves you wanting more of its hard chiming strut. Guitars slash and build into a storm circling singer Sean Van Vleet's sleek urbane croon, which may rise in anguish as he claims, "I'm trying to touch you, baby," but not so much so as to muss his coif. He conveys a cool within the swirling guitars and pulsing keyboards, even as he lasciviously threatens to "bang up my heart against your love." The entire track has the breathless impetuous aura of unrequited lust. The combination of atmospheric clouds and guitar showers is nigh irresistible, particularly with Van Vleet's polished delivery.

The other tracks aren't as taut or vibrant, but will wend their way into your confidences. The chiming "Damn Things Over" attempts to "stand at the top of our love," luxuriating in a particularly pretty break supported by watercolor washes of synth and somnambulant ringing guitars. "Strangers" and "Intruder" seem like a conscious pairing presenting polarized perspectives on prospective romantic entanglement witnessed through the metaphor of vigilance versus receptivity. "Strangers" tries to cut through the pretense ("To hell with all your fame and the reasons why you came/Are you with me?") as guitars nestle round in glimmering garlands. "Intruder" rides a strong backbeat like a train out of town, striking an almost power-pop pose with its "ooh-ing" backing vocals, as Van Vleet express romantic ambivalence, and warns his lover in the chorus, "I don't want to find you in my home."

Compared to what's come before it, "I Know You Know" is a bit anticlimactic, but that's really an outgrowth of the strength of the prior four songs. It's simply not as crisp and driven as its predecessors, but perhaps the slightly gentler pace makes it a fitting closer. Regardless, the 20 minutes Empires deliver onBANG makes a strong case that given the current music landscape, bands would be best off releasing EPs of their best songs while the material's still fresh rather than waiting more than a year trying to assemble a dozen good songs, or filling out the second half of an album with lesser material.