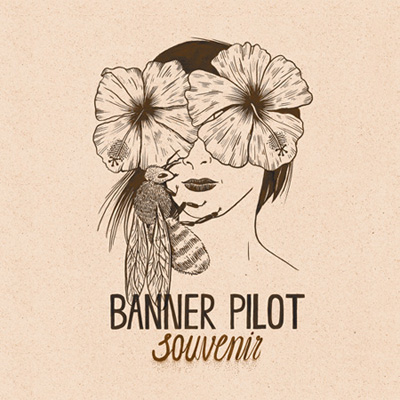 For their fourth full-length, Minneapolis melodic punks Banner Pilot said they consciously wanted to evolve their sound while simultaneously staying true to their roots. They thoroughly succeeded: Souvenir is, beyond doubt, their best and most cohesive record to date. Not so much a reinvention as an escalation of intent, its 12 songs truly ignite the fire that's always flickered within the heart of their music but which always stopped just short of bursting into flames. Ironically, though they're now 10 years into their career—and, judging by this record’s lyrics, well aware of that fact—they sound as vital, relevant and youthful as ever. “Letterbox” might be about the fleeting nature of youth, but its driven guitar lines rage against the dying of the light with fierce determination, albeit with wistful appreciation of all the years that have passed and friends who have passed on.

“Colfax” and “Springless” are both wasted and wounded, but still full of wonder, while opener “Modern Shakes” trembles with nostalgia and regret but forges on regardless, its melody the perfect mix of Jawbreaker and the Lawrence Arms (who Banner Pilot have always proclaimed are two of their biggest influences). In fact, the opening riff of “Shoreline” is almost identical to Jawbreaker’s “Ache”—surely a deliberate homage to their heroes—before morphing into its own tale of loss and longing. There are other similarities to other bands, too—“Hold Fast” sounds like a gruffer, rougher version of early Blink-182—but really, Souvenir is the sum of its influences, rather than a collection of its individual components.

Urgent and impassioned, these 12 tales of broken-hearted, poetic romanticism, told by broken people on broken sidewalks, layering visions of the past and present on top of each other to create a world that simultaneously is and was. Because while these songs—which, incidentally, are all catchy as hell—reminisce about all those days and years gone by, their choruses soar with the hopes and dreams that still remain. They're not giving up or giving in, but continuing their journey, gathering scars—but somehow smiling as they do.