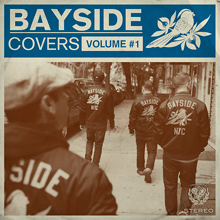 When it comes to cover albums, half the battle is picking the right songs. While many artists prefer to tackle Top 40 hits (note to all bands: The world does not need more “Call Me Maybe” covers), Bayside have never really been the type to ride the coattails of what’s currently popular. Save for their rendition of Sean Kingston’s “Beautiful Girls” on Punk Goes Pop 2, the band have generally looked back into their own influences to find inspiration, having previously covered NOFX and Weezer live. But instead of pulling from past punk acts, they've taken a decidedly different turn on Covers – Volume 1, choosing to tackle songs from the Ronettes, Elvis Costello, Del Shannon, Van Morrisson and Billy Joel.

At first, the choices might seem a bit head-scratching (after all, how many Bayside fans have even heard of Del Shannon or the Ronettes?). But the allure of this set is that the band have truly made the songs their own. The ultimate sign of a good cover comes when an artist is inventive and brave enough to take source material and shape it to fit their style, and the band hit it out of the park here. Perhaps the best example of this is Shannon’s “Runaway,” boasting minor-key verses tailor-made for Bayside’s brand of moody punk. Raneri, with his smooth-throated croon, was practically born to sing this song; factor in speedy punk beats and roaring guitar leads, and you’ve got a rendition that wouldn’t be out of place on a Bayside studio record. Elsewhere, the harmony-heavy “Be My Baby” is a fun take on the Ronettes' classic golden oldie, while the straightforward pop charm of Costello’s “Oliver’s Army” adds a little pep. Even better is the band’s take on Billy Joel’s “Movin' Out (Anthony’s Song),” complete with some downright incendiary guitar work from Jack O’Shea and an a capella ending that’s arguably the most beautiful moment captured on a Bayside tune. Joel’s original might as well have been state-issued to every Long Island youth back in the day, but the version here is nothing less than required listening for every past, present or future Bayside fan.