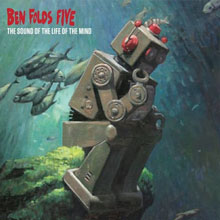 The Sound Of The Life Of The Mind

This review originally ran in AP 291.

When you think of “classic” Ben Folds Five, you think of smartass lyrics, spot-on vocal harmonies, unique instrumentation and clever arrangements. But on The Sound Of The Life Of The Mind, their first album in 13 years, the band are clearly graying in the temples. The album feels like a sequel to Ben Folds’ 2005 effort Songs For Silverman, which was technically proficient, but lacking the spirit of Folds’ finest work. Considering how good Folds’ backing band has been in recent years, there’s nothing about Robert Sledge and Darren Jessee’s performances on Life that will make you realize you’re listening to Ben Folds Five. Still, a few songs are gems, including the string section-assisted ballad “On Being Frank” and the bouncy, witty sing-along “Draw A Crowd,” with its chorus aimed at touring bands across the world: “Oh, if you’re feeling small/And you can’t draw a crowd/Draw a dick on the wall.”