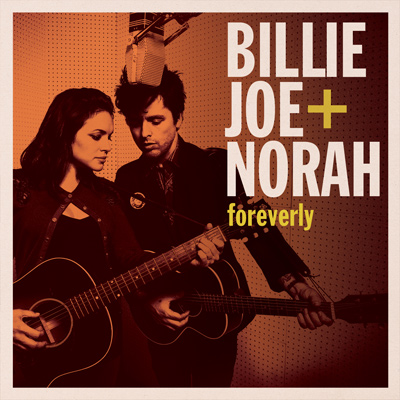 With Green Day, Billie Joe Armstrong has achieved the rarified kind of success where the music industry will now indulge whatever pet project he puts his mind to. A Broadway musical based on one of his albums that will soon become a Hollywood movie? Done. How about releasing three albums in four months? Not a problem. Few could have anticipated the existence of this project, though: a track-by-track recreation of the Everly Brothers' 1958 album Songs Our Daddy Taught Us with pop-jazz chanteuse Norah Jones providing the harmony vocals. Fewer still could have predicted that the album would be an absolute delight.

With all due respect to the man, it helps that Armstrong doesn't sound at all like himself on this release. Gone is the faux British accent and snot-nosed attitude, replaced by a gentle croon that meshes incredibly well with Jones' glassine soprano. You can pick out the familiar tonality that has driven some of Green Day's softer moments, but otherwise if you didn't see his name on the cover, you might not know it was him. The project is also aided by the fact that this isn't a typical run through the greatest hits of the Everlys. True to the source material's title, these tracks are old folk and country standards that Phil and Don learned from their paterfamilias, written by icons like Charlie Monroe and Tex Ritter. (It would have been a little too cute to hear Norah and Billie Joe laying their voices down to “Cathy's Clown.”)

Unlike the Everly Brothers' version which featured just guitars and close vocal harmonies, these tracks are given a full course of instrumentation, with drums, pedal steel and fiddle popping up throughout. They never overwhelm the songs, however, sitting comfortably in the background cushioning the real focus: Jones and Armstrong's singing. This was probably recorded like most modern albums are, with instruments isolated and slowly stitched together in Pro-Tools. But thanks to the work of mixer Chris Dugan, it sounds like everything was knocked out in one afternoon with everyone huddled around one microphone.

To add even more praise to the folks behind Foreverly, whomever it was at Reprise that decided to schedule this for a late fall/early winter release deserves some credit as well. Foreverly feels custom made for long walks through leaf-strewn streets or a brisk dark evening at home. The warm spirit that emanates from this loving tribute should be more than enough to keep you cozy through the cold months ahead.