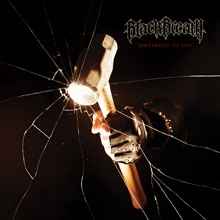 Alongside labelmates Nails and All Pigs Must Die, Seattle’s Black Breath have been doing a fine job of keeping the spirit and sound of crust punk alive and well in recent years. With 2010’s Heavy Breathing, they took the fuzzy clamor, sneering obnoxiousness and hardcore attitude of Discharge or Hellbastard and infused it with flavors of thrash and Iron Monkey-esque sludge to riveting effect. Sentenced To Life is no less impressive, maintaining the belligerence and coarse edges of its predecessor while building upon this to make a more diverse and arresting collection.

Fans of the band at their fastest and most ruthless will find plenty to love in the meaner-than-hell title track, “Forced Into Possession” and “Mother Abyss,” all of which barrel along in a haze of demented aggression. It’s not easy to deliver a performance that sounds as tight as this while conveying a sense of volatility that suggests everything could come flying apart at any moment, but that’s exactly what Black Breath do, assisted by the producer Kurt Ballou (Converge, the Hope Conspiracy). Just listening to the extended larynx-shredding screams of vocalist Neil McAdams is enough to make your throat close up, and the bile he pours on every syllable makes it clear that there is no posing going on.

When the band ease up on the throttle, they are no less destructive—in fact, they are often more insidious when they’re not trying to cave your head in. The eerie, chiming intro to “Endless Corpse” is chilling to say the least, hinting almost in a post-rock direction, and the chugging bludgeon of “Home Of The Grave” and “The Flame” boast flavors of old-school doom and death metal, adding extra depth. These shifting dynamics increase the record’s overall potency, and while it makes an abrasive mark on first exposure, it grows more and more absorbing with each successive listen, making Black Breath one of premier heavy bands to be watching in 2012.