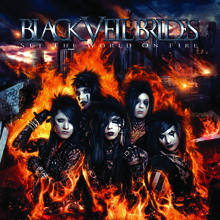 Set The World On Fire

It would be easy to write off Black Veil Brides simply because of their looks, which many QWERTY cowboys have done from the safety of their mom’s basement. But while BVB’s image might scream Mötley Crüe, the music on Set The World On Fire is anthemic arena metal that draws equally from the ’80s (Iron Maiden) and the present day (Avenged Sevenfold) with surprisingly serious, heartfelt and, most important, melodic vocals from bandleader Andy Biersack. “Fallen Angels” combines stadium-sized drums with a screeching dual-guitar solo; ”The Legacy” is loaded with heavy riffing and impressive double-bass work from drummer Christian “CC” Coma; and “Ritual” sounds like something John Feldmann would’ve written for Story Of The Year. Still, there’s no question Biersack and the boys are making an active decision to go after the Rock On The Range crowd with lunkheaded hard rock (“God Bless You,” “Youth & Whiskey”) and painfully bland ballads (“Savior”) that are just dull enough to strike a chord with middle America. To that, we say good luck, guys. We hope you know what you’re getting into.

“Set The World On Fire”