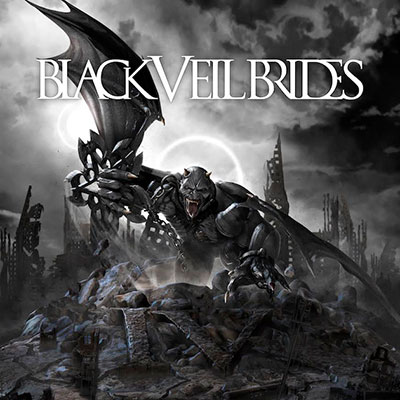 Black Veil Brides frontman Andy Biersack readily admits that when he sits down to write a song, his go-to metaphor usually revolves around fire and/or flames. Although it opens with a track titled “Heart Of Fire,” there’s all sorts of heat coming off BVB’s fourth album that’s not blatantly namechecked. Producer Bob Rock was the perfect mentor to guide his wards through the making of a career-defining record that traverses through 25 years of hard-rock history. Black Veil Brides may very well be the flashpoint to make grizzled rock fans look forward to what’s ahead, while curing younger listeners of their tabula rasa worldview.

The disc is top-loaded with sonic octane booster right out of the box. In addition to the aforementioned “Heart Of Fire,” the rapid-pulsing “Faithless” finds guitarists Jinxx and Jake Pitts bringing tag-teaming, neck-snapping riffage and shredding to the forefront, while “Devil In The Mirror” continues BVB’s jet stream urgency. As a vocalist, Biersack has never sounded more confident and real, whether he’s being heroic (“Drag Me To The Grave,” “World Of Sacrifice”) or stabbing himself in the heart (“Goodbye Agony,” the six-minute power ballad “Walk Away”). Songs like “Shattered God” and “Stolen Omen” further drive the band into the arms of listeners who unquestionably put Judas Priest and Falling In Reverse tracks on the same playlist.

Cynics may bark that Black Veil Brides is the best album of 1989, with big production, fretboard calisthenics and grandiose arrangements. But in a world where bands from the scene are looking to get fat from the well-trampled, butt-rock radio path, Black Veil Brides’ fourth album sounds far more sincere in both its intentions and execution. At this party, it doesn’t matter if you’re wearing Misfits, Mötley Crüe, Metallica or Escape The Fate shirts—you just need to take BVB’s invite to come along, period.