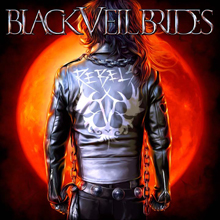 To cap off their banner year, Los Angeles arena-metallers Black Veil Brides push out a quick and dirty three-song digital EP that does more to show where the band plan on going in 2012 than where they've been. The first track, “Coffin,” appears to be a leftover from the Set The World On Fire sessions, having been produced and co-written by Luke Walker (who also produced and co-wrote Set The World On Fire). It's odd they chose to omit it from the album, as it's better than a good chunk of what made the cut (especially late-album filler like “Youth And Whiskey”). After opening with an appropriately eerie piano part, “Coffins” quickly morphs into a classic BVB rager, with scorching leads and an anthemic chorus. But one thing that makes this track stand out is the return of frontman Andrew Biersack's screaming vocals, something largely absent from Set The World On Fire. It's a nice nod to the longtime BVB fans while not detracting too much from what the band are circa now.

BVB's take on the hard-rock standard “Rebel Yell” is decent enough for what it is (plenty of double-bass rolls and pinch harmonics are added to give the song a bit more of a metal edge), but Biersack doesn't have the same sort of vocal sneer that made Billy Idol famous. His smooth baritone crooning doesn't do much besides make the song feel even longer than it already is, at nearly five minutes long. Even stranger still is the band's take on KISS' “Unholy,” one of the band's more forgettable singles from their “unmasked” years in the ’80s and early ’90s. BVB do nothing to spice it up—the inclusion of a guitar solo from metal legend Zakk Wylde does nothing to help proceedings, instead making you realize how much better this guy is than either of BVB's guitarists. It's truly an odd choice for a cover, until you realize that this is BVB telegraphing their future: They're most likely going to write big, dumb, mainstream-friendly pop-metal songs a la KISS, Mötley Crüe and Poison in order to spread their gospel to as many people as possible. Goodbye Warped Tour, hello Rock On The Range. Of course, if BVB dumb it down too much, it's going to be goodbye Rock On The Range, hello rib cook-offs.