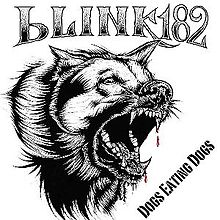 Typically, EPs are viewed as stopgap releases to keep a band’s momentum going between tours or album cycles. But Blink-182’s new five-song effort, Dogs Eating Dogs, is more than that. Considering it took the band more than two years from their original reunion in 2009 to deliver music (2011’s uneven Neighborhoods), the fact that this EP was conceptualized, written, recorded and released in under two months is a testament to how important Blink-182 have become once again to Tom DeLonge, Mark Hoppus and Travis Barker. (Of course, we could’ve waited another few days if it would’ve meant better cover art than what we ended up with, but that’s neither here nor there.) The point is, Blink fans shouldn’t just gloss this release over in anticipation for a full-length in the future, as Dogs Eating Dogs is a strong effort.

The EP’s opening track, “When I Was Young,” is also its best—a 40-second intro lulls you into a false sense of calm (or dread, depending on how much you enjoy Angels & Airwaves’ extended instrumental passages), the song then snaps to attention with a double-time verse pushed by crisp hi-hats and DeLonge’s best vocals in quite some time. Then the half-time chorus hits, with DeLonge singing, “It’s the worst damn day of my life,” while Hoppus chimes in with, “It doesn’t hurt that much.” It’s a great bit of Blink’s vocal dichotomy, and it’s catchy as hell to boot.

The EP’s Hoppus-led title track shares more than a passing resemblance to “Lycanthrope” by (+44), Hoppus and Barker’s post-Blink band, and also feels like something Alkaline Trio would pen musically. (Seriously, just picture Matt Skiba singing and it sounds spot-on.) It’s the angriest, most aggressive song on this EP and has a natural energy much of Neighborhoods was missing. “We need to find some middle ground/It’s always sex or suicide,” Hoppus pleads, reparting the song’s title twice before DeLonge takes over for the remainder of the chorus.

The following track, “Disaster,” is DeLonge’s opportunity to work in the vibe of his post-Blink band, Angels And Airwaves. The intro contains what sounds like manipulated radio frequencies, anthemic marching drum hits and a whole bunch of delayed guitar. Luckily, once the verse comes in at the one-minute mark, the tempo picks up and the delay pedal gets stomped off in exchange for the distortion pedal getting stomped on. DeLonge’s chorus lyrics are a bit goofy (“What do you fear, my love?/Your soul, it will float like a dove”), but his enthusiasm is palpable.

“Boxing Day” is the trio’s first ballad since 2003’s “I Miss You,” and the songs have a lot in common lyrically (and not just because Hoppus references Christmas in both). Each song’s chorus focuses on the power love has, especially when it’s unavailable or unattainable (“Don’t waste your time on me, you’re already the voice inside my head” from “I Miss You,” “I’m empty like the day after Christmas/Swept beneath the wave of your goodbye” from “Boxing Day”). And yes, DeLonge’s verse melody does sound a bit like Smash Mouth’s “All-Star” (once you hear it, you can’t unhear it), the rest of the song is well constructed, with Barker playing on an electronic kit to add a unique element behind the acoustic shuffling of DeLonge and Hoppus’ instruments.

“Pretty Little Girl” will cause the most message board uproar, though, with its guest rap from Yelawolf. It’s not as awkward as, say, when Lil Wayne popped up on Weezer’s “Can’t Stop Partying,” but it doesn’t really add anything to the track besides an extra 35 seconds. (Guys, just because Travis Barker had an idea doesn’t mean you have to do it.) As for the rest of the song, it carries a strong new-wave vibe in the verses, with Hoppus’ bass doing the heavy lifting underneath a waterfall of synths. The song kicks into high gear for the pre-chorus and chorus, though, with Barker’s militaristic stickwork driving DeLonge’s lyrics (written for his wife) home: “If you break my heart then I’ll change your mind/And I’ll do it again/If you play the part and I will play mine/And I’ll do it again/If we miss the mark, if we hold on tight/We’ll be here to try it again.”

Given how stacked the deck was against Blink ever getting back together in the first place, the fact that they got over that hurdle and made a record is pretty monumental. That they learned from that difficult recording process and used the experience to make new music that is just as strong if not stronger than anything on Neighborhoods is impressive. If these are the kinds of Blink-182 songs that get written when all three members are in the same room together, then all we need is someone to slap a padlock on that door during their next rehearsal. With any luck, they should crank out a freakin’ masterpiece next time.

“When I Was Young”