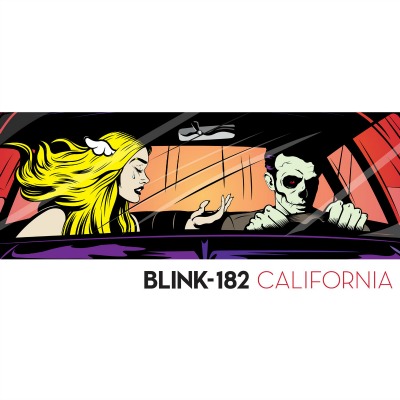 That California even exists is something of a miracle. Just a few years ago, when Blink-182 were wrapped up in the in a very public stalemate—largely driven by founding guitarist/vocalist Tom DeLonge and his inability to commit to making the band his priority—it seemed quite possible we’d never get another album from the legendary pop-punk group again. But with DeLonge now on the sidelines (for how long is unknown, as he claims he’s still a member of the band and never tendered his resignation) and Alkaline Trio’s Matt Skiba in the fold, it seems like bassist/vocalist Mark Hoppus and drummer Travis Barker are back to something that’s been lacking in the Blink universe for the past few years: fun.

Whereas the band’s trajectory since 2003’s self-titled magnum opus grew more and more experimental (largely driven by DeLonge, whose songs were far more head-in-the-clouds compared to Hoppus’ more conservative fare), the band’s seventh studio album is largely a return to form—both in feeling and function. No matter how weird the band tried to be on Blink-182, 2011’s Neighborhoods and 2012’s Dogs Eating Dogs (with varying degrees of success), Blink-182 are at their best when writing big, glossy pop songs. (In a 2014 interview, DeLonge referred to them as “nursery rhymes on steroids,” though by the end of his time in the band, that sound was the last thing on his musical mind.)

Producer John Feldmann—a man who’s helmed his fair share of those types of songs for bands such as 5 Seconds Of Summer, Good Charlotte and All Time Low—was clearly the perfect person to hold the reins this time around: Not only has he seemingly re-energized Hoppus—who, for the past few years, has been sleepwalking through his vocal parts and avoiding writing actual bridges—but Feldmann also has helped the band add the sonic sheen that’s been missing from their music since they re-formed in 2009. Neighborhoods was a mess of hollow-sounding tones (largely the result of the album’s well-documented piecemeal creation), but California explodes from the speakers with much-welcomed, in-your-face sheen on “Cynical,” a double-time slab of skate punk and desperate vocals.

Musically there’s a lot that’s reminiscent of old Blink-182: “She’s Out Of Her Mind” is a 2016 rewrite of “The Rock Show” (albeit not quite as good, though Hoppus’ lyrical nod to the Cure’s The Head On The Door is a nice Easter egg); the fervent “The Only Thing That Matters” feels like a toothy Enema Of The State throwback; “Left Alone” combines a DeLonge-esque spacey intro with one of the album’s most powerful choruses; and first single “Bored To Death” swirls “Adam’s Song”-meets-“Stay Together For The Kids” guitar lines into a mammoth sing-along chorus. But there are also stabs at progression here, namely the skyscraping, electronic-tinged alt-rocker “Los Angeles” and the Patrick Stump co-write “Sober,” which combines drum machine stabs and a sing-song “na na” refrain.

And then there’s Skiba. The Alkaline Trio co-frontman had the unenviable task of replacing one of the most distinctive singers in the history of pop-punk, and to his credit he doesn’t try to stand in as a DeLonge clone here. His writing style isn’t on display as much as one might hope—no giddily twisted references to coffins present—but he still leaves his mark on songs like album standout “San Diego,” “Sober” (with a strong vignette about his time as a Chicago bike messenger) and “The Only Thing That Matters,” which features a second verse only he could pen. It feels like the band haven’t figured out the best way to fully capitalize on their new secret weapon yet (for starters, the vocal balance between Skiba and Hoppus feels a little too egalitarian; hopefully the duo will each get some tracks to themselves on future releases), but they’ve wasted no time throwing him into the Blink ranks. When the guitarist gets the chance to shine here, he overwhelmingly rises to the challenge.

Is California perfect? Certainly not. At 16 songs, including two joke tracks, things are a bit bloated. (“Kings Of The Weekend” and “No Future” are two obvious cuts, while the album-closing “California” tries to juxtapose somber suburban malaise with the endless promise of the Golden State but falls just a bit short.) It would also be nice to hear more of Skiba’s darker influence injected, something Hoppus himself explored on the post-breakup project (+44). Still, there’s something to be said for everyone pulling the rope in a similar direction after years of DeLonge-Hoppus tension, which added an interesting dynamic to Blink-182 but ultimately resulted in two disparate, disjointed songwriting styles on Neighborhoods. So in the end, California sounds like what Blink-182 probably should sound like in 2016: upbeat, hooky and, above anything else, a total blast. Some will call the lack of truly progressive moments a regression while others will hail the album for being a breezy throwback. But Hoppus, Skiba and Barker have given Blink-182 momentum for future productivity and success. After years of stalled recordings, broken promises and all-around dysfunction, that alone feels like a win.