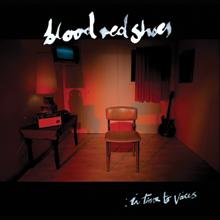 In Time To Voices

This review originally ran in AP 289.

The third album from British duo Blood Red Shoes may have been issued in their homeland this past March, but the bulk of it feels like it was first heard in 1992, when the alternative/indie-rock movements were percolating with possibility. Guitarist Laura-Mary Carter and drummer Steven Ansell share vocals, sometimes instruments, to convey a post-grunge landscape that’s teeming with everything from Breeders-esque alt-rock sensibility (“Down Here In The Dark”), a 21-UZI salute to Kurt Cobain (the 88-second “Je Me Perds”), cough-syrup wooziness (“Stop Kicking”) and a vocal vibrancy somewhere between Shirley Manson and Bilinda Butcher (the title track). Carter and Ansell aren’t reinventing the wheel, but they’ve got a way nicer ride than most of the pretenders currently being exalted by friendless bloggers.

“Down Here In The Dark”