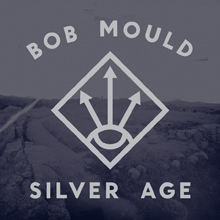 For Bob Mould, three’s a lucky number. In the ’80s, he cut his teeth as frontman of the Minneapolis trio Hüsker Dü, a legendary underground trio whose melodic hardcore, punk and power-pop inspired modern acts such as Foo Fighters and No Age. In the ’90s, Mould spent time at the helm of the similarly poppy Sugar, an ear-splittingly loud three-piece whose 1992 debut, Copper Blue, was recently reissued. And as of late, the 51-year-old has been playing solo shows with two other talented musicians: drummer Jon Wurster (Superchunk, the Mountain Goats) and guitarist Jason Narducy (Robert Pollard, Telekinesis).

Mould also recorded Silver Age, his first solo studio album since 2009's Life And Times, with this pair of musicians. Unsurprisingly, it’s a powerful, live-sounding record—and his most concise, rock-focused release since Sugar’s heyday. The trio bring unassailable energy to these 10 tracks, whether tackling steamrolling punk (“The Descent,” “Keep Believing”), mid-tempo jangle-rock (the R.E.M.-ish “Angels Rearrange”), grungy ’90s-alt-rock sludge (“Steam Of Hercules”) or noisy power-pop (“Star Machine”). Mould matches this vigor with some of his most raw vocal performances in years—whether he’s sneering, expressing longing or in lock-step harmonies with his bandmates.

Indeed, as always, Mould’s calling card is a pure pop core. Even Silver Age’s most raucous songs—the lurching, metallic title track or the furious post-punk drone “Fugue State”—boast a catchy hook or memorable melody. It’s rare to find an artist who’s so adept at writing accessible and ferocious music. It’s even rarer to find an artist who’s been doing this successfully for over 30 years. Then again, Bob Mould is no ordinary musician—in fact, you could say he’s a pop genius. Silver Age is just one more confirmation of that fact.