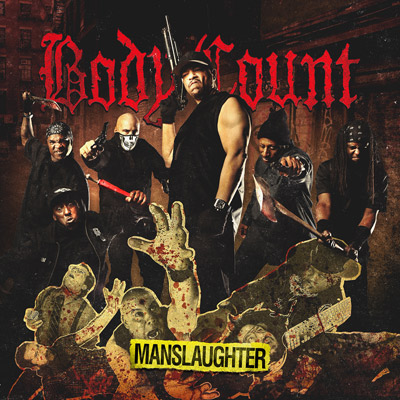 Twenty-two years after their debut, rapper-turned-actor/author/philosopher-king Ice-T’s thrashcore band, Body Count, are back…with their fifth album. Some history, for younger readers: In 1991, Ice-T devoted a track on his O.G. Original Gangster album to introducing Body Count, an all-black metal band he’d formed with friends from high school. They made their full-length debut the following year; musically, it was solid, blending hardcore, punk and thrash and throwing in some classic rock/metal moves, like the power ballad “The Winner Loses.” Lyrically, the record was more of a mixed bag, juxtaposing hilariously boneheaded fantasies like “Voodoo,” “Evil Dick” and “KKK Bitch” with more serious tracks like the aforementioned “The Winner Loses” and, of course, “Cop Killer,” the track that made the group the subject of nationwide controversy and ultimately cost them their record deal with Warner Bros.

That wasn’t the end of the story, though. Body Count released two more albums in the ’90s, 1994’s Born Dead and 1997’s Violent Demise: The Last Days, and while neither got much attention from the press, the songs were as good as or better than the material on their debut. “Necessary Evil,” from Born Dead, is built around a riff worthy of Slip It In-era Black Flag, while “Shallow Graves” is a powerful anti-war statement set to a downtuned thrash-death riff guaranteed to move any pit. On Violent Demise, the music was slower and more primitive, but the lyrics to songs like “Root Of All Evil,” “Dead Man Walking” and the title track were among Ice-T’s darkest and most poetic.

Let’s not talk about 2009’s disappointing Murder 4 Hire; let’s just say this instead: Manslaughter is easily the best thing Body Count’s done in 20 years, and it might be their best album, period. Ice-T’s vocals have all the power of his ’90s work, and the music—featuring original lead guitarist Ernie C and three new guys (the other founding band members are all dead)—is punishing metalcore that fans of Hatebreed, Throwdown and Ringworm will love. Speaking of Hatebreed, Jamey Jasta makes a guest appearance on “Pop Bubble,” a song calling out pop singers who sing about materialistic bullshit while the economy implodes and the government spies on Americans. Other songs taking a serious lyrical approach include “I Will Always Love You,” a nod from former Army Ranger Ice-T to U.S. veterans (also including a musical quote from Jimi Hendrix’s “Machine Gun”), “Back To Rehab” and “Enter The Dark Side.” On the other hand, tracks like “Pray For Death,” “Black Voodoo Sex,” “Institutionalized 2014” (a cover of Suicidal Tendencies’ classic anthem) and a metal reworking of the original “99 Problems” (yes, Jay-Z borrowed the chorus from one of Ice’s early party raps) allow his dark and violent sense of humor to come to the fore. Manslaughter is a ferocious, heavy record that proves once again that Ice-T and company are undeniable metal contenders, far more than a pop-cultural footnote.