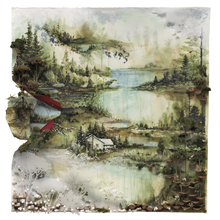 There's a moment during “The Wolves (Act I And II),” from Bon Iver’s breakthrough debut, For Emma, Forever Ago, where the most brutal contrast simply works. It's when Justin Vernon, the center of the indie-folk project, fearlessly inflects the last word of his quietly emotional interrogation, “What might have been lost?” with an Auto-Tuned flourish. It's where the organic meets the electronic and yet, the little upward swing in his voice caps the repeated query perfectly. (Vernon did it again most famously with “Woods,” on the follow-up EP, Blood Bank. Kanye West found it so brilliant, he lifted it for “Lost In The World.”)

This sense of unabashed juxtaposition occasionally imbues Vernon’s newest effort, with varying degrees of success. The promising opening dalliance of “Towers” sounds like it could be the most upbeat, up-tempo shuffler in the Bon Iver canon (akin to Kevin Devine's “Hand Of God”), but it goes and finds its own graceful, reserved pace. “Hinnom, TX” might have members of the Bee Gees and a smeared, Marvin Gaye spoken-word sample for all we know, and the otherwise deeply moving “Calgary” is lightened up with nearly cutesy keyboard fuzz.

Bon Iver has spruced up his sound considerably; a large part of the self-titled affair is comprised of easy-flowing, full-band drifters. The project is no longer shackled to the minimal, one-man strum of For Emma, but it's all the more beautiful and heart-rending. It's something far too busy and layered to be labeled as mere indie folk, but it's not nearly noisy, whimiscal or lively enough to be thought of as psych-pop.

One of the most unexpected elements is the pretty, intertwining flourishes of American Football and Owen winding through tracks like opener “Perth” and the subtly brassy, nearly six-minute “Holocene.” Whether Vernon is finally showing off some long-reserved Mike Kinsella influence or if it's just mere coincidence is anyone's guess, but the fragile, smart feel of that sect of '90s emo is integrated into Vernon's atmospheric folk smoothly.

The last true curveball comes on closer “Beth/Rest.” Placing Vernon squarely in the realm of ’80s solo acts, it's a delicate ballad with big synths and cheesy saxophone of the Phil Collins/Hall & Oates variety. Though the track already has and likely will continue to divide Bon Iver's fanbase for some time, it's strangely good; it somehow retains Vernon's trademark wistfulness through soft jazz/blues emoting (with some anachronistic Auto-Tune, of course). A bit of closing twang references Vernon's folk roots.

While Bon Iver seems emotionally underwhelming at first compared to For Emma, multiple listens reveal just how equally tender Vernon is when awash in layers. Bon Iver is a brave change in certain places and only a careful departure in others, but its seemingly polar styles blend smoothly as only Vernon is capable of.