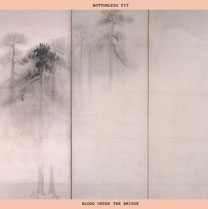 Blood Under The Bridge

In an interview taped for the upcoming documentary Couldn't You Wait: The Story of Silkworm, Pavement's Stephen Malkmus talks about how Silkworm—despite having respectable (if criminally overlooked) runs on indie giants like Matador and Touch And Go—never seemed to be remotely motivated by careerism. When Silkworm drummer Michael Dahlquist was killed in an auto accident by a suicidal driver in 2005, even the band's most diehard fans assumed guitarist Andy Cohen and bassist Tim Midgett might justifiably step back and fade into indie-rock history. Instead, they almost immediately formed Bottomless Pit. Now, with drummer Chris Manfrin of Seam behind the kit, Cohen and Midgett have released Blood Under The Bridge, the second Bottomless Pit full-length—and while it doesn't quite match the intensity of their 2007 debut, Hammer Of The Gods, it simmers with a heartbroken majesty all its own.

After opening with two plodding, forgettable songs, the album hits its stride with the third track, "Summerwind," in which Cohen's gritty, plainspoken drawl wraps up a cryptic confessional in a thunderously heavy, country-rock riff. A handful of subsequent tracks—including the churning, chunky, almost Crazy Horse-esque "Is It A Ditch?"—sound so much like vintage Silkworm, it's downright eerie. And by the time the disc's closer, "38 Souls," disintegrates in a primal scream of grimy distortion, classic-rock guitar snarl and horrifying mortality, the album's slow start has been all but forgotten. That Cohen and Midgett are still making music after decades of popular indifference and one act of unthinkable tragedy is admirable; that they're still making albums as soulful, uncompromising and evocative as Blood Under The Bridge is close to heroic.