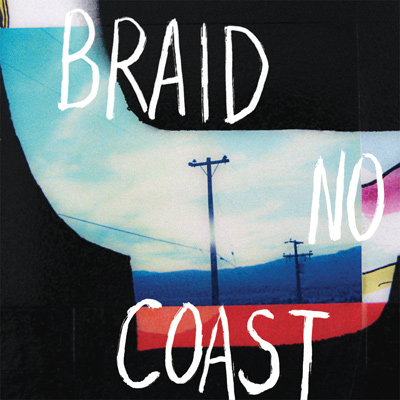 There's no more glaring way to put the “Midwest” in “Midwest emo” than to title an album that claims coastal neutrality. Along with Cap'n Jazz and the Promise Ring, Braid helped cultivate the uncorked, spastically energetic 1990s emo strain that's now suddenly one of the most blogworthy around, resulting in thinkpieces and debates and generally extensive coverage over the last year from practically everyone.

However, No Coast, Braid's first proper full-length in 16 years, seems to largely ignore both the stuttered, experimental tendencies they first adopted from early post-hardcore and the hallmarks current emo revival bands would borrow heavily from in favor of its own voice. Braid purveyed more smoothed-out, melodic territory as they progressed, resulting in 1998's high-water mark, Frame & Canvas, and No Coast provides the logically extreme of that end. While the bucket of strange time signature jumps and muttered ruminations of past fare are both long gone, they still find an angularity here–it just has rounded corners. Guitars squiggle, interlock and sprawl apart without resembling a three-ring circus, giving the melodic No Coast panache without sounding like any sort of accidental Hey Mercedes rehash. It ends up lying somewhere in the crosshairs of alternative rock and emo, much like what Jimmy Eat World have been up to in the last 10 years, but with a subtle charm and organic recording from producer Will Yip that, for its own good, pulls its leash away from any sort of arena immensity.

No Coast runs with a fluid continuity that stuffs in hooks galore. It begs to be told that it comes in with a bang, because that's almost quite literally true—after an understated riff, vocalist/guitarist Bob Nanna softly narrates, “Bang,” which also happens to be the name of the song. From there, the band draw cryptic observations (the title track), convey expected nostalgia (“East End Hollows”) and come to grips with their existential place when dwelling on interpersonal relationships (“Damages!,” “Pre-Evergreen”) through a usually shrewd delivery that flares up with quick sparks of barked energy from fellow vocalist/guitarist Chris Broach, who gets far more time on the mic than usual (and sounds more confident than he ever has before). Though No Coast fills out with both tracks from the band's 2013 split with Balance And Composure, retroactively making that appearance an LP teaser, they provide tastefully familiar bits to latch onto while getting acquainted with the rest of the album.

No Coast is no cash-in. Braid have delivered a record as nuanced, vitalizing and brilliant as anything in their already storied back catalog, reemerging as strong as any of the numerous bands that have popped up to critical notice in their wake.