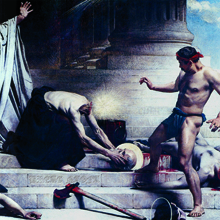 It's important to remember that Neurosis were at one point, literally speaking, a post-hardcore band. They formed as a crust punk-influenced act who eventually embraced heavier, doomier and more ambient metal atmospheres, so much so that they came to be known as one of the originators of “post-metal.” Literally speaking, Bréag Naofa are also post-hardcore, given their members' background in now-defunct Seattle favorites Trial and Sinking Ships. But to speak about them in those terms might bring to mind anyone from Fugazi to Thursday, when in truth, Bréag Naofa are seizing that same sort of musical territory of which Neurosis would eventually take hold. The band's self-titled debut—a four-track, 40-minute beast—lumbers along with the sort of choking, windstorm atmospheres and bloodthirsty howling with which Neurosis broke ground (and on which followers like Buried Inside and the Ocean have based their careers). You can spice up a 10-minute act of barging post-metal through a variety of ways, and Bréag Naofa have at least two key factors: an almost comically vicious aversion to organized religion and journeyman guitarist Roger Kilburn.

Now, granted, the former is almost entirely aesthetics: You'll probably never understand a word their singer is growling, but the band's Old Irish Gaelic-derived name loosely translates to “holy lie,” and, as their mission statement reads, “the common thread throughout [their] ideology is that religion still poisons every aspect of the human experience.” Hell, the record opens with a voice-scrambled excerpt from a 1992 interview with famed contract killer Richard Kuklinski, who is recalling a time he essentially mocked a victim of his who “was 'Please, God, no'-ing all over the place.” Kuklinski actually expresses a hint of remorse for it in the interview, but out of context, it's downright unnerving.

As for Kilburn, his main contributing factor to acts like Sinking Ships, Love Is Red and Wait In Vain was this incredibly distinct, emotional-sounding guitar tone, which helped lend both humanization and a special sort of tonal brilliance to those bands' songs. Musically, Bréag Naofa might largely be rehashing a lot of post-metal trademarks, but among their specialties are Kilburn's thoughtful guitar leads, weaving in and out of these songs with a subtly dynamic and creative flair. He essentially overtakes the last third of “III” with the most deliberately fuzzy and emotive series of riffs you'll hear on this type of record all year.

Thankfully, Kilburn's not the only saving grace on the album. Highlights abound, from the vaguely brighter textures and occasional D-beat sprawl that paints “II” to when that same beat finally comes in on “III” after a couple of impressive fake-outs. The ominous clang that opens closer “IV” provides the album's best rhythmic buildup, and it's paid off by the passages of thunderous crunching and headbang-worthy thudding that follow. Really, whatever style of music Bréag Naofa have left behind, they've found something rather compelling in the here and now.