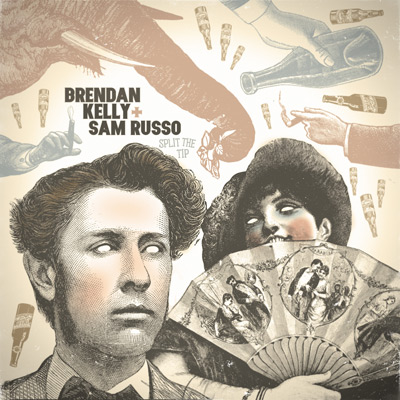 More and more seasoned punk vets are dabbling in acoustic releases these days, and it makes sense: These guys aren't getting any younger, so it's natural to want to explore different musical avenues. When it's done with sincerity, the music can pack just as much of a punch as a full-band sound can—sometimes even more, like on this great split EP.

British singer/songwriter Sam Russo utilizes a full band for his tunes, although the tunes stay on the loose, rough-and-tumble acoustic side of things. “Small Town Shoes” opens the split with its riff paying homage to that of Counting Crows' “4 White Stallions,” setting the tone for a melancholy yet upbeat tune that brings to mind a ragged Josh Ritter. His “Crayfish Tales” displays more of a somber, sensitive side and it also sounds great. When Russo sings, “You said, 'I just want to do something, even if it's something bad,'” there's a wisdom in his words that betrays his youthful appearance.

Brendan Kelly of the Lawrence Arms recorded his two songs solo and acoustic in the back room of a bar, and they steal the show. His voice and overall demeanor seems to be settling further into world-weary; these songs sound like they're sung by someone approaching 40 but pushing 100. Which, if you're trying to play emotive acoustic music, is perfect.

His “Frangelico Houston” is bare and plaintive, musically and vocally. It's hard to tell if Kelly is stepping into character for his songs or not, which adds to the very real sense of intensity his music always carries. It's a good song, and it goes by way too fast. The beauty is in the desperation, and its best exemplified on “Pigs,” the last cut: When Kelly croaks out, “What happened to all the, 'Oh, you'll be fine's?… What happened to my fucking body and mind?” with the sound of bar patrons chattering away behind him, oblivious to what he's doing in the backroom (channeling the spirit of the most defeated Westerbergian moments) as they're living it up, it's almost too much to handle, a great clashing of good times and bad, which seems to be what this excellent split is all about.