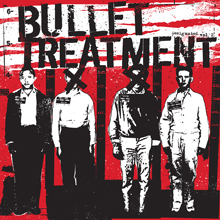 The origins of Los Angeles's Bullet Treatment lay in the early-to-mid-2000s, with the West Coast act tearing off ripping hardcore punk in the vein of classic forebears Angry Samoans and T.S.O.L., with the Bronx frontman Matt Caughthran at the helm. For whatever reason, the band seemed to become more of a pet project by 2009; that year found BT releasing Designated Vol. 1, where they offered up the same song—a solid, straightforward, ’80s-styled hardcore punk slam—six times, with different vocalists from notable punk and hardcore bands fronting each version. On Vol. 2, it's more of the same. In fact, the band even use the same exact musical composition they did for Vol. 1. While perhaps thinking up a new backing track of raging ’80s hardcore shouldn't have been too difficult—and likely would have made Vol. 2 a little less redundant in the context of the apparent series—the all-star cast at least provides mild variety.

Both current and ex-Comeback Kid frontmen Andrew Neufeld and Scott Wade appear on opener “Insomnia,” and it's interesting to hear both of them adapt their voices to consistently speedier, early-’80s-type fare than the somewhat chunkier youth-crew pacing of much of CBK's material. On “Young Bodies,” Vultures United's Jordan Salazar sounds a bit like Sick Of It All's Lou Koller—no complaints there. Outbreak have leaned more towards the “punk” side of hardcore punk as they've progressed, so the snotty deliveries from frontman (and Think Fast! label head) Ryan O'Connor and guitarist Billy Bean on “Rally Cry” makes perfect sense.

Caughthran reconvenes with Bullet Treatment for “God's Plan,” and their natural chemistry is evident, as it's the most enjoyable and memorable collaboration on the 10-minute EP. Not to say “Confessions Of A Hopeless Romantic” (with Cancer Bats' Liam Cormier) and “Vox Populi, Vox Dei” (fronted by A Wilhelm Scream's Nuno Pereira) are bad, per se—hearing that same backing track just gets a little old by then.