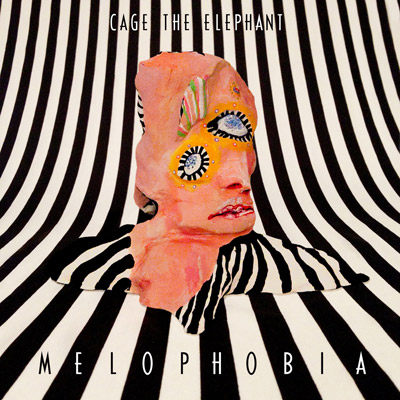 There’s a lot happening on Melophobia, the third album by Kentucky rock band Cage The Elephant. The five members spent time separately concocting their own ideas for the album after a lengthy period of time together on the road. The resulting album is, at its best, ambitious and teeming with ideas and, at worst, one heck of a mish-mash of sounds. Actually, the best example of both of these scenarios is the late-album track “Teeth,” a bouncy, fun, spastic pop-rock song that deteriorates into an odd and slightly disturbing spoken word piece that should have been left on the cutting room floor. Straightforward pop-rock songs like “Come A Little Closer” do a better job of capturing the essence of this band: melodic tunes that stick in your head.

The second half of Melophobia ventures into even more oddball territory, running through surfy rock similar to Canadian indie-pop bands like Toyko Police Club and Zeus (most notably on back-to-back tracks “Halo” and “Black Widow”), then goes completely left-field for “Hypocrite,” a lo-fi sounding slower number with a horn-infused freakout ending. Although Shultz’s voice often hits the same keys as Black Francis, the bulk of Pixies comparisons the band got for their second album, Thank You, Happy Birthday, are mostly unfounded this time around, making way for a more experimental, almost psychedelic sound.

It could be argued that album No. 3 was Cage The Elephant’s opportunity to really branch out see where they could take their sound. It will be up to their diehard fans to decide if where they’ve taken it with Melophobia is too far sideways or not.