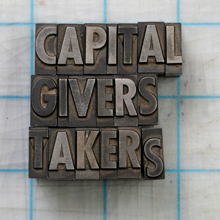 A variety of full-time careers and family lives will prevent Capital from ever becoming internationally renowned punk superstars—but Givers Takers proves they have the chops for such a plateau. The veteran quintet (among their many associates, Iron Chic and Silent Majority are perhaps the most well-known) are already a Long Island hardcore institution after six years in the trenches. But real life limits their activity, and it's largely the reason more than three years separate 2007's Homefront and their new LP.

Initially self-released on the first Monday of 2011 as a free digital download, Underground Communique is finally giving the album a proper physical release via colored vinyl. It's a worthy service, as Givers Takers is this year's best-kept secret in melodic hardcore. It also plays out with a vibe of reckless abandon and pure fun that's hard not to enjoy. The riffy “Road Rash” closes with an instant-classic prank call, where guitarist/vocalist Rob McAllister tries to get his fake tough-guy hardcore band on an already full festival (“T.U.F.F. Tools Used For Fighting. From Elizabeth, NJ”). The next moment, the band are chugging and pounding their way through their own version of 108's moshy sound on the sneering “I Am Anonymous.”

Basically, Givers Takers is a hardcore mixtape with an amicable sense of humor. “Youth Culture” is expert thrash-punk, while “Conspiracy Theories” could have come from a vintage episode of MTV's 120 Minutes. “Little Pill” calls up the ghosts of Embrace and Turning Point with a chilling sense of emotional urgency even those bands never quite captured.

While it feels like Givers Takers is just missing that special something that keeps it from being a total winner, there's no denying how tight and versatile the act have become during their time together. Defying the expectations one might have of “that local band,” Capital keep churning out quality tunes, quietly waving the flag for melodic hardcore all the while.