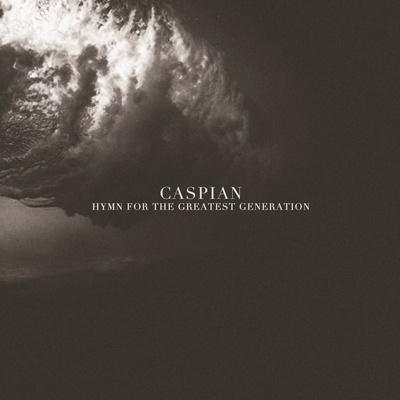 Hymn For The Greatest Generation EP

Caspian's new EP is the follow-up to last year’s buzzworthy third album Waking Season, and the band's first release since the sudden death of bassist Chris Friedrich earlier this year. As an instrumental act, an EP of a couple unreleased tracks, a demo and a couple remixes can be pretty satisfying in and of itself. It certainly helps that not only are Caspian uncommonly gifted melodically for a post-rock band, but they rely on melody more than dynamics. Their songs are more prog in this sense: They’re not as driven by theatrical builds as by movements that obey an idiosyncratic but organic rule set.

What’s particularly nice about these six tracks is that they’re eclectic without changing channels. Unreleased track “The Heart That Fed” has a carnival-esque feel, rich in tympani. It begins in a medieval mode, goes a little Emerson Lake & Palmer before swelling epically as vocoder vocals low in the mix guide the outro. “CMF” is a pretty, finger-picked acoustic guitar-driven track in the vein of Elliott Smith abetted by sympathetic washes of synth. The demo of “High Lonesome” is actually personally preferable to the original because it gets in your face more and quicker, riding its shoegazer-inspired waves of distortion into an anthemic ambient guitar bit vaguely reminiscent of U2's the Edge. The title track has a kind of adult pop feel, like something heard in your massage therapist shop or that hippy all-organic coffee shop. Perhaps that’s the joke—the self-declared “greatest generation” are a little boring and overly sedate.

Both of the remixes are nice. Arms And Sleepers bring horror-movie synths to “Procellous” giving it a spooky, haunted old school hip-hop feel, transforming what was originally a much more space-rock freakout. Even better is Doomtree collective member Lazerbeak (aka Aaron Mader of the Plastic Constellations), who manages to embellish the track’s already intriguing breakbeat undertow with all manner of trilling sonic geegaws like it’s passing through a psychedelic car wash. It’s a terrific remix of one of Waking Season’s finest tracks. Hymn For The Greatest Generation is a fine effort that at around 35 minutes is just about perfect length and especially seductive in its sequencing.