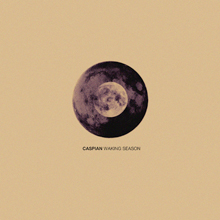 The post-rock landscape has become a bit crowded in recent years, with new Mogwai and Explosions In The Sky clones seemingly cropping up every few weeks. Caspian carved out a sizable plot in the high-rent district of that overcrowded territory in 2009 with their second full-length, Tertia, a fantastic album that probably deserved more recognition than it received. And as fantastic as it was, it didn’t seem like it was a record that vaulted them into the post-rock elite as it should have. But that’s about to change with Waking Season. The album is a triumph, a huge step forward for a band that should be regarded as one of the best in the genre.

The most noticeable improvement over Tertia lies in Waking Season’s production. Rather than the band calling all of the shots when it came to recording and mixing (as they had in the past), the band recruited highly-respected and accomplished producer Matt Bayles (Isis, Mastodon) to focus arrangements, capture sounds and mix the final effort. That proved to be a wise decision, because Caspian have never sounded better. Their lush arrangements are clearer than ever before and their atmospherics are ethereal and enthralling. While much of that can be chalked up to Bayles’ skill set, a lot of it comes from a 10-year-old band who are maturing in all the right ways.

That developing maturity is most evident in the band’s improved patience. With Waking Season, they’ve allowed parts the time they need to develop and fully immerse the listener. They’ve perfected the slow-build, the steady and meticulous layering of instruments and rhythms, the separation of highs and lows. And that patience and deliberate pacing makes the album’s crushing crescendos hit harder than they ever have (or ever should, really). There are several legitimate misty-eyed moments in this 57 minutes of music. This is best displayed in the 10-minute epic “Gone In Bloom And Bough,” which is Caspian at their absolute best; dynamic, haunting, chill-inducing, uplifting and crushingly heavy.

The breadth of the instrumentation employed on Waking Season’s 10 tracks is breathtaking; from the drum and vocal samples to the organically built ambient textures to the spiraling acoustic guitar arpeggios to the chilling, Brian Eno-esque piano in the title track to the live string quartet in “Procellous” to what sounds like a Mellotron in “Halls Of The Summer” to the hypnotizing loops in “Akiko.” Simply put, the album is fucking gorgeous. Caspian are one of the best bands in post-rock pushing the boundaries of the genre, expanding the scope of what is possible in instrumental rock music, and raising the bar for their peers—and Waking Season is arguably one of the best records of 2012.

“Gone In Bloom And Bough“